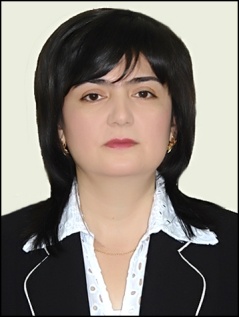 The head of department:

HISTORY OF THE DEPARTMENT

The department works on the direction of " Technology of postal communication" 5350500 for bachelors and "Organization and technology of postal communication" 5A350501 for masters. The first graduation of the department in the amount of 37 bachelors took place in 2003, the first masters graduation was held in 2017,1- master in number ; as well as 66 bachelors and 2 masters graduated from the university this year.

Since 2008, the department was headed by Candidate of Technical Sciences, Associate Professor M.M. Makhmudov. During this period, a lot of work was done to equip a computer class, to create a model post office, as well as in organizing research work with the specialists of O'zbekiston Pochtasi OJSC. In 2009, in accordance with the order of the director of the Central Scientific and Technical Information Center No. 73-K of March 20, 2009, the senior teacher E.T.Ishdavletova participated in training and retraining courses at the Odessa National Academy of Communications named after A.S.Popova.

In 2013, international relations were established on experience exchanging with the Moscow University of Information Science and Communications(Moscow) and the Higher State College of Communications (Minsk). As a result the manuals of foreign authors on the specialty of "Postal technology" were received and since then international conferences are held with the participation of the department’s teachers.

Since September 2013, the department "Automation of the postal service" was renamed into "The technology of postal communication."

The department participated in the competition and received a grant of applied research in the Committee on Coordination and Development of Science and Technology in the amount of 35 million soums for the period 2015-2017.

At present, Otakuzieva Zukhra Maratdaevna is a doctoral student at TSEU and performs scientific work on the specialty 08.00.14 “Information technologies and systems in economics” which is called “Problems of introduction of modern ICT in enterprises of Uzbekistan and the role of the information economy in its development”.

Candidate of Technical science, do.ctor of Philosophy Nazarova Gulchehra Nurmuhanbetovna has been elected head of the department since september 4, 2019.

In Tashkent College of Communication and the Academic Lyceum of Information Technology, the teaching staff of the department conducts problem lectures for the students of the direction “ Technology of postal communication”.

The teachers of the department take an active part in international, republican scientific- technical and methodological conferences and seminars on issues related to the subject of the department. For example, in 2017 on March 1-2, in accordance with the order of the Rector of TUIT, the head of the department Otakuzieva Z.M. and senior teacher Kudryavtseva L.V. were sent to the Russian Federation, city St. Petersburg to attend at the VI International Scientific, Technical and Scientific Methodological Conference called “Actual problems of infocommunications in science and education” APINO 2017.

The XXIII International Scientific and Technical Conference "Modern means of communication" was held on October 18 - 19, 2018 in the city of Minsk, Republic of Belarus by the State Academy of Telecommunications of Belarus which was dedicated to the twenty-fifth of anniversary of the Academy.

The head of the department of “Postal Technology “, Associate Professor, Ph.D. Z.M. Otazuzieva was invited to the conference for presentation on the topic: "ICT development and information technologies in Uzbekistan" at the meeting of the section "Economics, quality management system, organization, management and marketing in Communication”. In addition, on October 17, 2018, a cooperation agreement was signed between the Belarus State Academy of Communications and the Tashkent University of Information Technologies named after M. Al-Khorazmi.

In addition, teachers regularly publish scientific and review articles in special and popular science journals. Lecturers of the department together with Uzbekistan Pochtasi JSC annually hold problem lectures for students in the branches of Halkaro Post Office and Tashkent Post Office, conduct study tours for students to such companies as TNT, EMS-Falcon and Deutsche Post DHL.

Organization and technology of the postal service

FOLLOWING SUBJECTS ARE TAUGHT AT THE DEPARTMENT

EDUCATIONAL-METHODICAL WORK OF THE DEPARTMENT

SCIENTIFIC-METHODICAL WORK OF THE DEPARTMENT

The department "Technology of Postal communication" has been working on applied research, ongoing project in the framework of the state grant for 3 years BV-Atex-2018-271 "The problems of introducing modern ICT and the place of information economy in the development of enterprises of Uzbekistan" since the beginning of 2018, the amount of the project is 250 million soums.

The department "Technology of postal communication " on December 7, 2018 held a scientific and practical seminar on the topic: "The role of information economy in the development of enterprises of Uzbekistan" in accordance with the Action Plan and in the framework of the implementation of research work on the project BV-Atex-2018-271 "Problems of introduction of modern ICT and the place of information economy".

The following issues were considered at the seminar:

According to the results of the discussed issues, practical recommendations and suggestions were presented on the ways of active usage in the performance of information economy enterprises.